I first met Dr. Per Ingvar Branemark in the summer of ’95 in Gothenburg, Sweden. I traveled with 3 other Indian dentists to gain a first hand exposure to dental implants. We arrived at the Branemark Osseointegration Centre in Sweden and were received with the hospitality that the Swedes are well known for. After exchanging a few pleasantries we were led into another hall where dentists from around the world had gathered, about 30 in all. A few seconds later, Dr. Branemark walked in. I was struck by the energy, enthusiasm and vitality of the man. He had a twinkle in his eyes and a purpose in his demeanor. Good morning doctors, he said, his voice cutting into the silence. “I am not a dentist”, he began. He went onto explain that he was an orthopaedic surgeon and research professor who had happened upon osseointegration by accident. Extolling the possibilities of this phenomena, he believed that thousands of people would be helped by osseointegration. Hope was now there for the hopeless.

At this point he stopped talking and abruptly said “Frank, come in”. A small curtain parted and in walked a heavy set young man in his mid-thirties. P.I exchanged the usual pleasantries and then said, “Frank, show these doctors what you have.” To which, Frank pulled the trouser off his left leg to show a limb completely constructed from groin to foot in Titanium. A team of Surgeons and Neurosurgeons had, in a series of surgeries, given him a moving, usable limb. He had lost his leg in an accident while farming. This, said PI, is what osseointegration is all about. As dentists, you can bring cheer to your patients by giving them fixed teeth. You can make them smile again.

Titanium implants could be placed not only in the jaw but could also serve as a scaffold for artificial prosthesis. Silicon is used to replace soft tissue and is draped over implants to restore lost body parts and rehabilitate patients who were physically and emotionally traumatized. This would help them get back into mainstream society. Thus, implants are being used to correct loss of facial structures like a nose or an ear due to the ravages of cancer.

So began my foray into the world of dental implants. Moving from just burying implants for undisturbed healing to immediate loading and to guided surgery, the journey has been a satisfying and rewarding experience. Prior to the discovery of “osseointegration” dental implant technology consisted of blade and transosteal implants. A metal blade was placed within a bony incision with a vertical segment and sticking out through the healed ridge. Transosteal implants used for the lower jaw consisted of a number of screws inserted into the inferior aspect and extended into the oral cavity. These implants relied on mechanical retention. Dr. Branemark’s discovery of the fact that Titanium could fuse with bone came to be known as osseointegration and root form implants called fixtures became the new standard of Implantology. This serendipitous discovery has changed the way we practice dentistry. 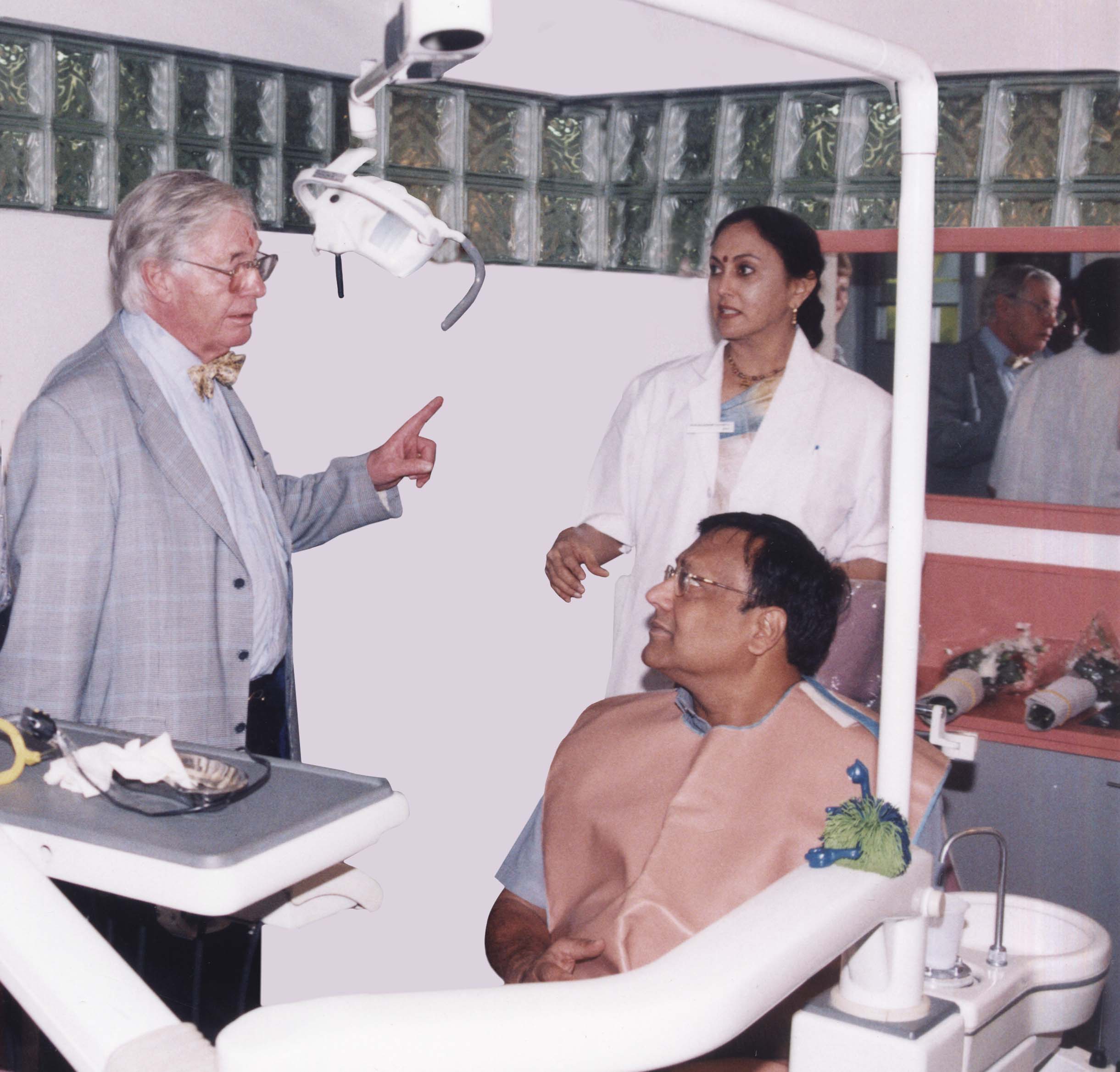 Dr. Per-Ingvar Branemark, the pioneer of implant dentistry, visits Acharya Dental in the year 2002
Dr. Branemark honoured me by visiting Acharya Dental in Chennai, India where I practice. It was the highlight of my career. Patients rehabilitated with Branemark implants were called and he assessed them meticulously and had a kind word for all my patients. He remembered me years later at a Nobel BioCare Symposium. The Indian lady with the red “dot” on the forehead he said, with a smile. I met him once more in March 2012. His health was failing but his enthusiasm remained. He was now on a wheelchair, frail but indomitable. Dr. Yataro Komiyama “his Japanese son” and my mentor, was also at this Meeting. P.I looked up and smiled. He still remembered the obscure lady dentist from India. Such was his charisma.

Dr. Branemark has inspired not just me but generations of dentists internationally. Today the man who made the world smile is no more. This message has certainly reached the dentists of the world. “Nobody should die with their teeth in a glass”, he said. We will see that this does not happen, dear P.I. What better way than that to celebrate your life and your gift to mankind? 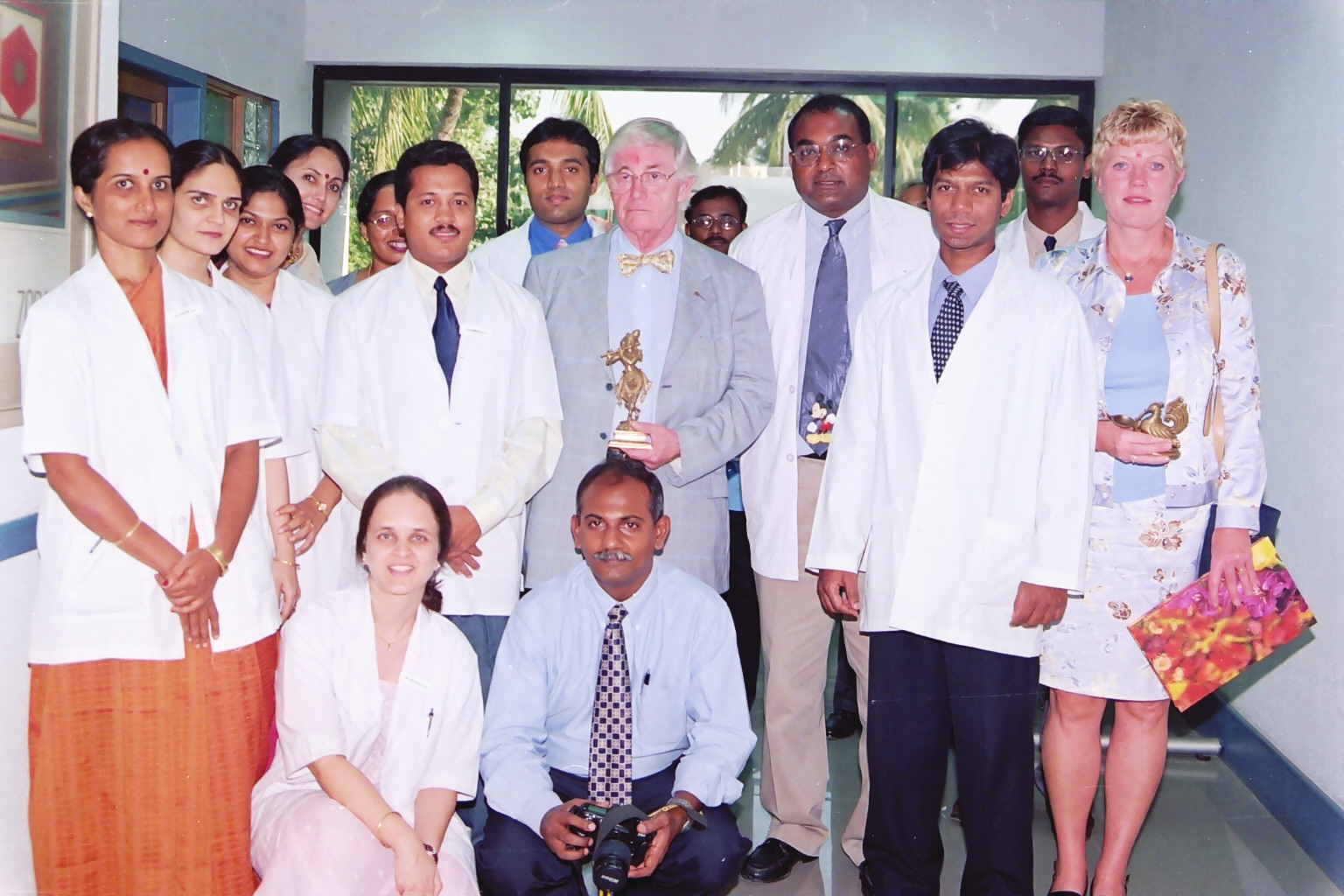